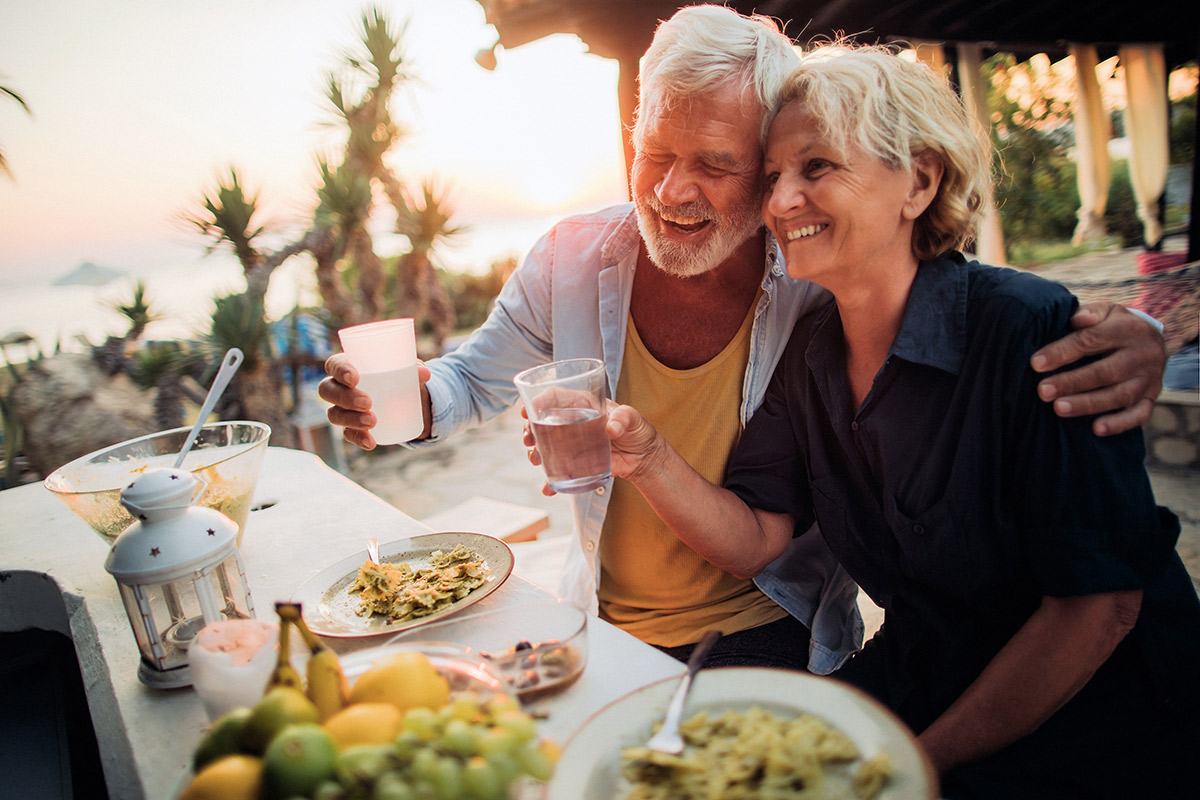 With so many world events affecting everyone in different ways, we are thrilled to share some more Positive Vibes and let you know all about the Greek tradition of "philoxenia."

To the Greeks there are no strangers, only friends they have yet to meet. If you have ever been to Greece, you know this feeling well.... it's the ultimate embracing welcome from locals all around you that make you feel like family in virtually an instant.

The timeless story written by the Roman poet Ovid in 8 A.D. about Zeus and Hermes disguised as poor travelers showcases the sacred relationship between host and guest that embodies the ancient Greek tradition of philoxenia. As the legend goes, the two Greek Gods visited many villages in search of a place to stay for the night. A poor elderly couple, Baucis and Philemon, welcomed them as guests in their home and generously served them food and wine. After refilling her guests’ cups many times over, Baucis noticed that the wine jug was still full. Philemon then realized the visitors were actually gods and he offered to kill their only goose to feed them. Touched by this gesture, Zeus rewarded their generosity by transforming the humble cottage into a beautiful temple. Zeus also granted the couple their ultimate wish: to be the guardians of the temple and stay together for eternity.

Famously, both the Odyssey and the Iliad are filled with episodes in which philoxenia is either honored or ignored and the subsequent consequences are significant. For instance, when Odysseus sails to the island of the cyclops, the monster’s treatment of Odysseus and his sailors is a violation of the custom of philoxenia. The cyclops is punished for its transgression. Odysseus blinds his “host” and escapes.

In Ancient Greece, offering the best hospitality and conveying the true spirit of “philoxenia” has always been considered like an unspoken commandment of Zeus Xenios, the god of foreigners or strangers. Should a weary traveler arrive on one’s doorstep, the host was obliged to welcome them with food and shelter before asking any questions, whether they knew the guest or not. In return, the guest was obliged to show respect to the host via gestures such as staying only as long as necessary. For either party to fail in their obligation was considered an offense worthy of Zeus Xenios’ divine wrath.

Along with being particularly gracious in their hospitality, Greek’s keep this tradition of kindness alive today through small gestures such as offering a friendly smile to a stranger, helping a stranded motorist, or escorting a lost traveler to their destination rather than simply providing directions. This is the simple and beautiful reason why so many people feel like they have arrived "home" when they experience Greece.

Want to see what this tradition is all about firsthand?  Start planning your next dream vacation to a place that features postcard perfect sunsets and is on just about every traveler's bucket list…glittering Greece! For a little inspiration, check out our Greece travel program. We guarantee you’ll love feeling “philoxenia” every step of the way.

Positive Vibes – Dedicated To You